I’m a strong believer that we create our own meaning—something can be meaningful for no other reason than the fact that we believe it so. In that sense, I think all of us have a glorious purpose in creating the change and meaning that we want to see in the world.

I just finished watching Loki, one of the latest MCU television shows spearheaded by Disney. Some very light spoilers below, but it’s a great watch that pulled me into a compelling world and a story that hits on a lot of pressing philosophical problems we face.

A specific scene that stuck with me is when Classic Loki yells out “Glorious purpose!” as he fights a big boss to help his newfound friends. 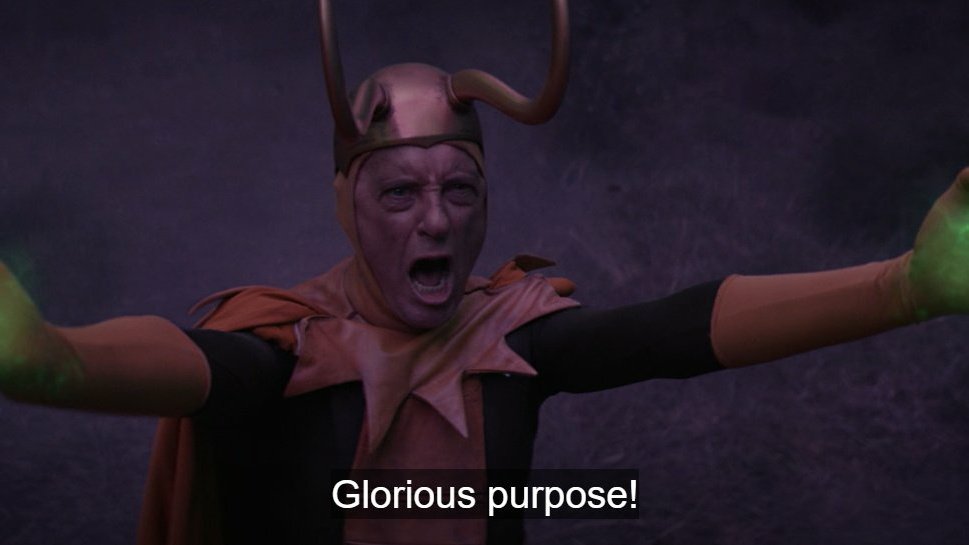 A recurring theme in the show is Loki’s need for a glorious purpose to dedicate his life to. Loki’s story is that he feels he deserves to rule Midgard (Earth) and acts according to this infallible belief in his proper place, rebelling against his family and becoming a traditional “villain.” As other characters dig into his true feelings (tricky given his nature to hide himself behind lies and facades), it’s shown that Loki is deeply insecure about his inability to be trusted by anyone else and really wants to devote himself to a cause larger than himself to gain this trust (i.e. his glorious purpose).

Sometimes I think about the rarity of those critical moments when people have the motivation and momentum for affecting change in the world, whether that means caring for a community (like sweeping the school floor), sharing out a personal essay, or taking over Earth. I then think about how often external circumstances prevent people from acting on that momentum to put the change into affect. I’m a strong believer that we create our own meaning—something can be meaningful for no other reason than the fact that we believe it so. In that sense, I think all of us have a glorious purpose in creating the change and meaning that we want to see in the world. I think the term “glorious purpose” imparts a bit of grandeur and bravado that might not sit well with how this purpose feels more like a social responsibility and playful gift, but it captures the importance of acting on this purpose.

With the advent of increasingly addictive, agency-deficient mediums for consumption and the upheaval of purposeful employment in society, I think a lot of people are forced to spend most of their daily time and effort on things that don’t matter to them. The promise of things like UBI combined with automation is that everyone can focus their attention on what naturally gives them energy and aligns with what they find purpose in. Having dreams and working to make them reality is a privilege in this world, but I think it’s one of the greatest gifts of life. I feel so much energy working on things that give me purpose that it’s hard for me to imagine forcing myself to do things that I couldn’t care for, let alone outright disagree with. This isn’t to say that having dreams and working to make those reality is an easy job. It’s incredibly tough work that forces growth of resilience, but at the end of the day, it feels gratifying and fulfilling to put that work in, regardless of how slowly the needle moves.

This is the 97th installment in my experiment of publishing raw, lightly edited mini-essays every day towards achieving 100 public pieces. Check out the rationale and the full list here.